Though Alzheimer’s devastates individuals and their families, occasionally a bright light shines from its dark tunnel. Sometimes innate gifts obscured through the toils of daily life emerge. Like what happened to Lester Potts, the late father of Dr. Daniel Potts, a well-known Alabama neurologist. 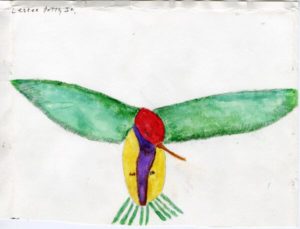 Lester was a rural Alabama saw miller who became an acclaimed watercolor artist after being diagnosed with Alzheimer’s (AD). Prior to developing AD he had never before shown any artistic talent. Art and music therapy at Caring Days, a dementia daycare center in Tuscaloosa, Alabama fed his creative expression, improving his cognition, mood, and behavior.

Daniel and his wife Ellen witnessed a transformation in Lester quite unlike anything they had ever seen. Moreover, what impressed them was how these therapies helped to restore Lester’s dignity and improved his quality of life. It was nothing short of extraordinary. Ellen remembers the time clearly.

“The only thing Lester had drawn before was of something to build. He was practical, the most utilitarian soul ever. For him to become an artist, it was so out of character. The more his disease progressed the more he painted his memories. This part of his psyche was released as his frontal lobe deteriorated. Where (Alzheimer’s took) the sense of self went away,” she explains, “his right parietal lobe was pretty much untouched until late in the disease process. All that creativity was probably there all along.”

Ellen explains that the frontal lobe inhibits creativity that may be buried deep within. “You’re inhibited from doing things you may have the talent to do because you don’t think you have the ability or you’re too inhibited to try. All that creativity was untouched until late in the disease process. It was probably there the whole time. The fact that he of all people would become an artist was the most miraculous thing of all.”

Lester’s new abilities influenced his son. “Before we knew it the art got a hold of me and I was staying up all night writing poetry, which is something I’d never done in my entire life,” Daniel says. “I went to Ellen and said we ought to put a book together of Dad’s art and my poetry.” In 2006 they put out The Broken Jar featuring his poetry and Lester’s art.

You’d think that a story like this would be enough, right? Not this couple. They took it and ran in order to give other dementia patients the same good fortune. They developed a program in collaboration with the University of Alabama Honors College, called Bringing Art to Life. 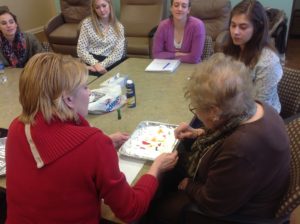 Each semester the program pairs five participants with mild to moderate Alzheimer’s with three Honors students.  Before the start of the art therapy sessions the students receive instruction on Alzheimer’s, person-centered care techniques, art and other expressive arts therapies, and are taught the importance of honoring and preserving the life story.  For the next eight weeks the students and patients work side-by-side in group art therapy.  During the sessions, the students capture life story elements for later use in crafting a memoir.

According to Daniel and Ellen, one of the most heartwarming aspects is watching how the students develop empathy for the dementia patients and for their caregivers.  The Potts’ based the course on A Pocket Guide for the Alzheimer Caregiver, a book they co-wrote in 2011. Lester was not their only family member with Alzheimer’s. Between the two of them they have lost eight family members to Alzheimer’s and vascular dementia. They demonstrated every situation in the book with a family story.

Daniel explains their motivation for establishing the program. “We were trying to use our experience with Dad and others to show that the person is still in there and build on that. Our focus is honoring the human being, the dignity people still have, despite this disease. We can still have a relationship with them that can be transformative for everybody. The art and the music help you tap into that.”

Ellen says “Through the pairing of the students and participants, it’s been nearly miraculous how some of the participants were able to come out of their shell.” She describes how the students and dementia patients found a connection, adding that previously many of the patients had been withdrawn and had stopped interacting with their families. “In the art therapy and reminiscing sessions they came to life.”

They tell the story of a well-known Southern artist, Sara Turner, who lost her sight to macular degeneration and developed Alzheimer’s. She joined Art to Life in 2014. Daniel remembers the day the 95 year-old joined the program. 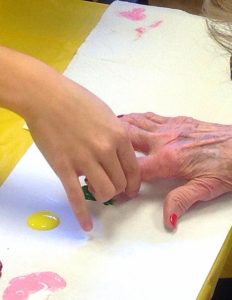 “Sara came into the room the first time and said she used to be an artist but didn’t think she could do the art project. Her students helped her, guided her hands, talked her through it, and asked her favorite colors.” She was elated and told the students “I can feel colors again”.

“Sara was completely authentic; the Alzheimer’s couldn’t mask that. The students were completely inspired by this blind woman with Alzheimer’s,” he says. “She was so full of gratitude, just to be alive and present. It made the students have introspection and look at their own lives and their own fears and the things they’re dealing with. Interacting with Sara brought all that out. It was therapy for those kids to be in the presence of this woman.”

He remembers sitting back and watching and being in tears. “Sara named the finished piece, Celebration – it’s a new beginning. It was a celebration and a new beginning and it was one of those Art to Life moments that has changed so many lives over the course of the last five years.”

Indeed. And to think it all started with a rural saw miller who had never painted a day in his life. I imagine that Lester is still painting, and smiling down on Daniel and Ellen, proud of how they’re changing lives through art, proud of all the goodness they’ve instilled. And maybe he’s just a little bit proud to have been the inspiration. How could he not be?

To learn more about Bringing Art to Life please visit them here.