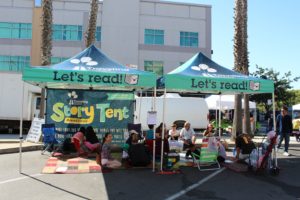 If you live in the San Diego area, or some other regions, and you’re a frequent visitor to Farmers Markets you may have noticed a tent full of children listening intently to an adult or another child reading a story from a book. If you stepped closer you probably saw the mesmerized looks on the children’s faces as they soaked in the words and tales taking them to places they can only imagine.

Many of the children who visit the StoryTents are refugees whose families fled their war-torn home countries; children like seven year-old Abdullah and his four year-old brother, Abdulramah, who escaped Iraq in the fall of 2015.  Such children are fairly commonplace in this nirvana on the sea. San Diego absorbs approximately 3,000 refugees a year, many from Iraq seeking a better life, a safer life for their families. 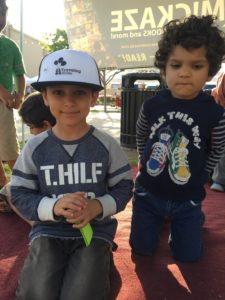 When the boys’ family arrived in the U.S. the children didn’t know a word of English. And it didn’t help that the boys were exceedingly shy. The boys’ mom said that leaving friends and family in Iraq was hard on the brothers, sadness often filled their days. She told a friend who had also escaped Iraq years earlier about her boys’ difficulty with adjusting to life in America. The friend told Mrs. Aleze about the StoryTent at the Farmer’s Market in El Cajon, a small city east of San Diego. Mrs. Aleze took them to the Thursday market, found the tent and the boys sat down to listen to a story being read. For the first time since their arrival on American shores she observed a spark of happiness. No matter that they didn’t understand English, the boys were hooked. After that first visit, their mom made sure they attended every week and their perseverance has paid off. Over the past year Abdullah not only learned to speak and read English, he now insists on reading aloud to the adult volunteer and the other children.

So who started these StoryTents? The literacy program is the brain child of San Diegan, Emily Moberly. When she was 22 she taught English in a bilingual high school in Honduras. She discovered that the kids didn’t read books; she soon figured out why. There 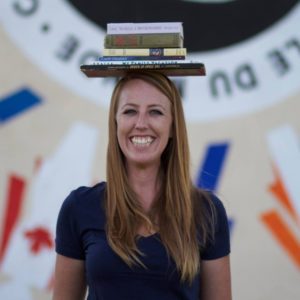 were few, if any, resources for kids to procure books. The town had just one insufficient library that rarely opened and a small, equally insufficient bookstore. On a visit home she bought as many books as she could stuff into her luggage, returned to the Honduran school and started a library. Over the next few weeks and months she watched the students connect with the books; she observed them fall in love with reading. Emily returned home and never forgot how unlocking the world of books to non-readers opened up a new chapter in kids’ lives, exposing them to new ideas, observations and insights. She decided to do the same in her home city, though not as a permanent structure. In 2010 she founded Traveling Stories as a 501c3 nonprofit operating primarily in farmers markets. Why tents?

“A tent allows us to be mobile and to fit in easily at a farmer’s market or other community hotspot. We want to make reading a part of everyday life,” Emily says. “We want to make reading more visible in disadvantaged neighborhoods. Kids in these neighborhoods have access to books through libraries and schools, but still the fact remains that 82% of low-income children in America are not reading at grade level by 4th grade.”

Emily is definitely onto something. According to the Literacy Project Foundation 50% of adults cannot read a book written at eighth grade level. 45 million adults are functionally illiterate. Among the 20 highest income countries the U.S. ranked 12th in literacy. That’s pretty astounding for a country as big and as sophisticated as the U.S. To combat illiteracy in adults, it must start with children; Emily gets it.

“Traveling Stories helps kids develop strong literacy skills, confidence in their ability to read out loud and a love of reading,” she says.

She chose the farmers markets because she saw that kids needed one-on-one reading support with people who love to read. She noticed children accompanying their parents to 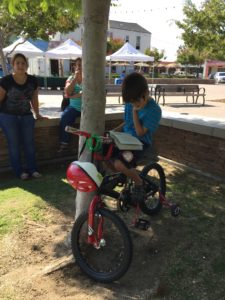 the local farmers markets and decided to try out a tent at the City Heights farmer’s market in 2011. It was a huge success. Now they’re in markets across San Diego, in Long Beach, Turlock, and Canada with plans to expand to more communities in San Diego over the next five years which Emily surmises will enable them to reach 5,000 children, turning them into better readers. After that they plan to go nationwide.

Emily spends much of her time raising funds as it costs about $20,000 to operate each tent per year. Between private and corporate donations, special events, sponsorships, grants, merchandise sales on their website and in-kind donations, so far they’re making ends meet and building for the future.

“That’s how we’re able to serve 40-plus kids every week at every StoryTent,” she says.

These days the StoryTents pretty much attract their own following, occupying the same spots week after week, making it easy to find them. Plus there’s an incentive. When children visit a tent, they pick out a book and read it aloud to the adult volunteer who 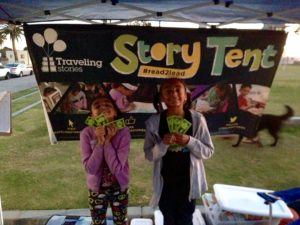 follows up by asking questions that help the child build reading comprehension and crucial thinking skills. The children earn a “book buck” for every book they read. For particularly long or complex books they can barter with the volunteer for extra bucks, which can be used to “buy” prizes (like the in-kind donations). Not only do the kids learn invaluable reading and comprehension skills, they’re also learning basic finance. Earn a buck, spend a buck. Pretty basic stuff and pretty darn smart.