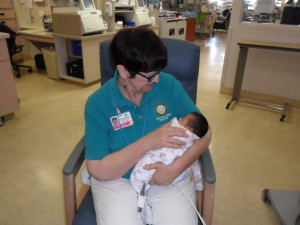 Darlene Piche of San Diego has always loved to cuddle babies. She got her fill when her two children were young and her five grandchildren were growing, especially when they would climb into her lap all at one time. Then all the kids grew up; the youngest grandchild is now 14.

“I needed to have some babies in my life,” she says recalling how much she really missed her cuddle time.

Prior to her retiring from UC San Diego she applied to be a cuddler volunteer at UC San Diego Health’s 28 year-old cuddler program that trains and hosts volunteers to hold and cuddle tiny infants in the neonatal intensive care unit (NICU). She was told there was a three year waiting list; she was prepared to wait and was ecstatic when she got called after two years. That was 14 months ago. She underwent four hours of training and began cuddling one morning every week for a four hour shift. She has always been the type of person with a smile on her face, but these days Darlene sports a constant grin; her joy emits like sunlight breaking a darkened morn.

Cuddling a full term, healthy baby is a no-brainer for most people. Not everyone has the capacity to cuddle a tiny, oftentimes sick, premature baby, so tiny its arms are the diameter of an adult’s finger, its little body attached to beeping monitors and a mind-boggling array of tubes. Darlene does, because she says she gets as much out of it as the babies do. She especially relishes seeing how the babies progress from one week to the next.

“It’s always gratifying to see a smile, even from the tiniest baby. I’ve seen cuddling truly make a difference. When I stroke their brows or put my hand on their heads or just hold and cuddle and burp them they feel my heart beat. It’s reassuring to them.”

NICU volunteering runs in Darlene’s family. Her sister has been a cuddler in the program for 10 years. For Darlene it’s a continuation of a previous career. Before she worked at UCSD she had a massage therapy business where she massaged both pregnant women and assisted in birthing. She remembers it as a wonderful experience adding that this is even better.

“I’ve told the nurses that I love retirement because this is the best job I’ve ever had.”

It seems easy enough, right? Holding a precious baby, giving it that human contact, watching it react to your touch? Sometimes it’s not so simple.

“The neediest ones are the drug babies because they have such a reaction to withdrawal; they’re in so much pain and kind of jittery,” she says. “Cuddling calms them.” Darlene estimates that she cuddles drug withdrawal babies every other week; it’s a common occurrence in the NICU. “When they’re awake they can’t just be laying in their cribs all the time. You gotta be interacting with them.”

Though cuddling is good for the babies and gives great purpose and joy to the cuddlers, it’s the parents who are probably most grateful to have a loving hand helping to take care of their child. Michelle Brubaker, who works with the NICU at UC San Diego Health and is a mother of two young children says that the parents want to be with their babies 24/7, but depending on where they live and what other responsibilities they have, that isn’t’ always possible.

“The role of the cuddler is so critical because it allows parents a break without feeling guilty,” she says. “They know that the cuddlers are filling that role for them. As a parent you want to be there non-stop, realistically that isn’t always possible.” She says that the cuddlers allow them to attend to children at home, jobs and preparing for the new baby who likely came much earlier than expected.

Lynne Trumbore, R.N., coordinator of the NICU’s cuddler program, says that the positive TLC and human contact the cuddlers provide help the babies grow quicker allowing them to go home sooner, adding that cuddling helps them develop neurologically, preparing them for their lives ahead. She says that research has shown this over and over.

A classic study on premature infants published in Biological Psychiatry offered an explanation as to why humans are hard wired for cuddling. Twenty years ago Dr. Ruth Feldman, a psychology and neuroscience professor at Bar-Ilan University in Tel Aviv assembled two groups of 73 babies at two Israeli hospitals. One group received no kangaroo care (holding babies) and in the other group the mothers held and cuddled their premature babies one hour per day for two weeks. They ran the study twice, once in 1996 and again in 1998, switching which hospital provided kangaroo care. They examined the babies at 3, 6, 12 and 24 months, and later at ages 5 and 10 years. Feldman discovered that the kangaroo group outperformed the non-kangaroo group in multiple ways from improved sleep patterns to heart and respiratory rates to attention to the ability to direct their gaze and enact actions to achieve a goal. A decade later the children who were held showed better stress management skills too, as determined by the measurement of cortisol in their bodies. Feldman stated that the most remarkable aspect of the study was how little kangaroo care resulted in such a pronounced outcome – just 14 total hours over 14 days.

Although research confirms that cuddling premature infants has far reaching effects, Trumbore also views the cuddlers as a kind of Godsend, especially when other babies need immediate attention and nurses are pulled away to assist in a critical situation.

“We can’t be everywhere. Having the cuddlers there to help really decreases the nurses stress levels.” She adds that the cuddlers are critical to the operation of the NICU, noting that the cuddlers see it differently.  “The cuddlers say that they’re the winners because there’s something very therapeutic about sitting and holding and cuddling a baby.”

Darlene agrees. “I get as much out of the cuddling as the babies do.”

Sometimes goodness presents itself as angels among us. If those babies could talk they would probably say that Darlene Piche of San Diego is one of them.

Interested in being a cuddler? Contact your local hospital or if you are in the San Diego area contact the NICU at UC San Diego Health: 619-543-6560.

3 thoughts on “One Cuddle at a Time”