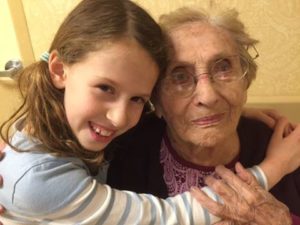 There are good people everywhere, and then there are remarkable people like Hailey, who takes care of her grandmother who suffers from Alzheimer’s. Not so unusual? Actually, it’s quite unusual because Hailey is nine years old and began caring for her beloved grandmother at the age of four. She adores her grandmother and has gone to extraordinary lengths to give her the best life possible.

What you may ask can a child do for an aging grandparent with such a challenging disease? Well, let me tell you. This child, who is as insightful as someone 50 years her senior, makes her grandmother’s world an easier place to live in, and one where she knows she is loved, deeply loved. How does Hailey get through, how does she communicate with her? 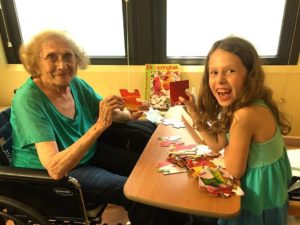 “I manage it by doing puzzles with my Grandma,” Hailey says. “Even if we don’t solve it exactly right it still makes Grandma happy.”

Hailey’s mom, Emma, says that her mother is still able to speak and she still recognizes them. That’s a big deal when it comes to dementia; there is nothing so heartbreaking as your loved one not knowing who you are. Emma says they are grateful, while acknowledging that there are other behaviors associated with the disease that can be difficult at times, such as frequent repeating. Anyone who has spent time around someone with Alzheimer’s knows that repeating is one of the more taxing aspects of the disease. It can be incredibly frustrating. Leave it to a nine year-old to come up with an effective tactic.

Hailey explains, “When Grandma keeps repeating herself I usually talk about a different 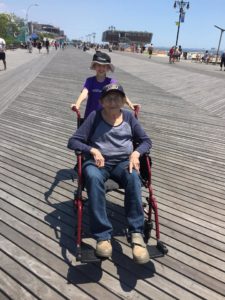 subject, I say words she can’t repeat, like I say ‘I love you, Grandma’. Or I ask her a question.”

As her mother plunged into dementia Emma looked, but didn’t find any books for kids that would lend support; books that might help them cope. When it became quite apparent that Hailey had figured out a few innovative ways on her own Emma encouraged Hailey to create something that would help other kids navigate the caregiving waters.

“I started thinking that I needed a blog to help kids, so that they know they’re not alone and show them ways that they could care for their loved ones,” Hailey says. “On April 5th it was published.”

Emma set up the blog for Hailey, who took it over. She uses the hunt and peck system and for smaller entries she completely types it on her own. Emma, a teacher, proofreads and edits if necessary. Sometimes Hailey dictates entries to Emma who types it for her. Emma emphasizes that Hailey definitely does most of it on her own. Hailey comes up with posts, such as her caregiving tips and strategies. She’s even featured her friend, Katie, as a guest blogger. The blog has become a passion for Hailey and for her mother, too. The following post that Emma wrote on Hailey’s blog explains why it was so important to launch the blog and the new community it is building:

According to the National Alliance for Caregiving there are at least 1.3 million children between the ages of 8 and 18 who are caregivers. Hailey realized that children can make a big difference in the world. Unfortunately, Hailey and I had difficulty finding other kids who are going through the same thing as Hailey. There were times, when Hailey would have loved to know that there were other kids “out there”; who are also going through similar experiences. As the saying goes, “necessity is the mother of invention”, so Hailey created the type of support group that she would have loved for herself. Her goal is for kids to have a platform to share ideas, offer tips, and get advice. She shares her experiences, to model for other kids.  Kid Caregivers is in its infancy, since the seed was launched in February (2016). I am excited to report that there are readers from: India, Africa, Greece, Germany, Israel, Russia, UK and the United States. Clearly caregiving is a worldwide issue and for children a very sensitive one. Her goal is to let other kids know that they are not alone. Hopefully, her dream of reaching “hundreds” of kids will become a reality. 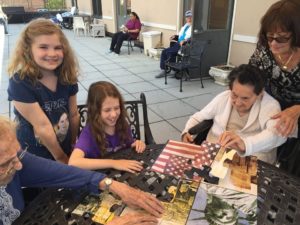 Hailey’s efforts don’t stop there. She is the Assistant Director of Puzzles to Remember, an organization that provides puzzles to seniors in various types of facilities. And then there’s a prototype she’s working on called the Memory Walker Alert. Not long ago her grandmother forgot to use her walker one day, fell, suffered a subdural hematoma and broke her hip. Hailey reports that her grandmother had to have surgery and is doing much better. But the incident disturbed Hailey; she wanted to figure out a way to get people with dementia to use their walkers. Emma told Hailey about a device called a proximity sensor. Though not an engineer, Hailey is working on a dual-sensor system where one sensor would attach to the walker and the other would attach to the senior. If the senior steps too far away from the walker it would give off a voice command “Walker! Use your walker!” and a sound would beep . As Emma is quick to point out, Hailey does not know how to build the circuitry, but she understands the mechanics behind it. She’s already sketched out her idea. 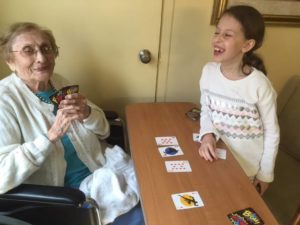 “As the adults, her father and I are trying to figure out how it can be done,” Emma says. “She came up with the seed of the idea. She told me ‘we need to come up with some kind of alarm system, Mommy, so Grandma doesn’t leave the walker.’ We showed her various videos of proximity sensors and she’s been working on it” Emma says proudly.

At the center of Hailey’s mission is heart. A big heart. Most children are content to play and be a kid. Hailey is a different kind of soul. Of course she is a kid, and does all the usual kid things, but she also has a rare vision not often seen in a nine year-old. That vision means both making life better for her grandmother and helping other children, showing them that they’re not alone in caring for someone they love. If her blog accomplishes that one task, if it helps just one child, she will be elated, because all the effort will have been worth it.

Be sure to watch the music video Stay for a Little While. Written by David Light and Bakhus Saba, it reflects on how children connect with dementia patients and features several photos of Hailey and her grandma.