It started as a simple idea and grew into a passion, a movement to make a difference one pillowcase at a time. In 2010 the magazine, American Patchwork & Quilting, issued a challenge to the quilting community: Make 1,000,000 pillowcases and donate them to charities in their local communities. If you know a quilter, then you know that quilters take challenges very seriously and boy did they take on this one.

Why a pillowcase? It seems pretty basic, right? It is, but to someone who just lost their home in a fire or to a teen moving from one foster home to another or to a child undergoing cancer care in a hospital surrounded by sterile white everything to a homeless veteran or to a woman seeking respite in a domestic violence shelter, a colorful pillowcase can mean the world. It can mean comfort. It means that someone cares.

The project took off and it’s still going strong. As of the 24th of March 2016 countless groups around the country have made and donated 663,684 pillowcases to their local charities (donations are reported and the magazine keeps a tally on their website). So who are the people who make and donate the pillowcases? They are individuals, groups, organizations and children. One group in Bloomingdale, Ohio, led by Mary Albaugh, illustrates the deep commitment these sewing volunteers make to the project.

In 2013 Mary lost her mother to accidental death in a nursing home. That was bad enough, then there were birth complications when her granddaughter was born. Little Karly Jean survived but it left Mary in a distressed state of mind. When her son told her to “get a life” she knew she needed to do something productive. She had heard about the pillowcase challenge and decided to start sewing. And she did. She sewed and sewed and sewed. Before long she had made 350 pillowcases; she donated them to Pillows of Hope for the Cincinnati Children’s Hospital Medical Center. As much as she liked making the pillowcases she missed the camaraderie that comes with sewing in a group.  Then she did something she had never done before – she founded a ministry, called Amazing Grace Pillowcase and launched it on Facebook.

On a Friday the 13th she scheduled her first “sew-in” at a local training center. Despite horrible weather, construction in the parking lot that forced everyone to park far away, and difficulty finding the sewing room at the center, over 30 women showed up to sew. By the day’s end the group had made 137 pillowcases. Mary said it’s a prime example of “If you build it, they will come.”

Mary fondly calls the volunteers her “sewing angels” because they bring joy to others, one pillowcase at a time. This humble group has made and donated well over 5,500 pillowcases as of this writing. If you ask Mary, she will tell you that they don’t just make  pillowcases, they’re an act of love and a symbol of hope.

Then there are the kids, lots and lots of kids who have taken to this project like the proverbial bee to honey. In 2015 Mary began holding events for kids to sew pillowcases for sick children in hospitals. Kids like Girl Scouts, 4Hers, and children inspired to learn to sew, if they don’t already know how. Even little ones in kindergarten. Kids who jumped at the opportunity to do something to help a sick child. Kids like Mary’s granddaughter, Karly Jean Otto, who at five years old made her first pillowcase (see this cute photo). 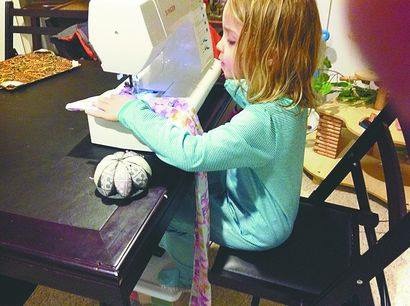 And Amanda Boring, an incredibly generous child. After attending sew-a-thons for the 4H and Girl Scouts, Amanda was so inspired that she saved her own money, made from doing chores around the house. She bought patriotic fabric for Amazing Grace Pillowcase, instead of spending it on clothes for herself. And there are others like Owen and Tina, grandchildren of one of the sewing angels. I don’t know who gets more out of these acts of love, Mary, or the kids who relish the opportunity to help other children. The kids certainly understand the significance of their efforts. 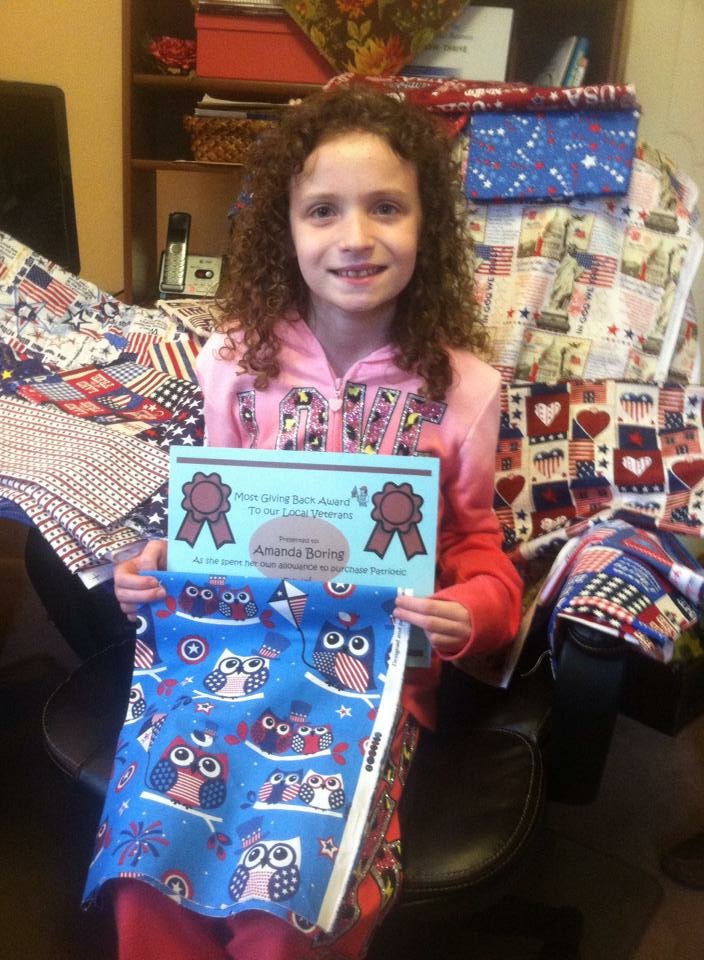 One time after finishing two events Mary asked the group “What did you learn from this experience? What did you use to help make these pillowcases?” A shy little girl raised her hand and said, “We used our hearts.”

Mary is incredibly proud that the kids get it, that they understand how good it feels to give to someone in need, to give back. Yes, they get it and so do the adults. They sure know how to raise good kids in Ohio, they sure do.