Every now and then I read a story that is both perfect for The Goodness Principle and perfect as is. That’s the case with this story about Bobbi Gibb, an extraordinary woman who back in the day broke the Boston Marathon restriction barring women from running. I love that she wouldn’t accept “no”. I came across her story in UCSD’s alumni magazine, Triton. Many thanks to Triton for allowing us to run the story. 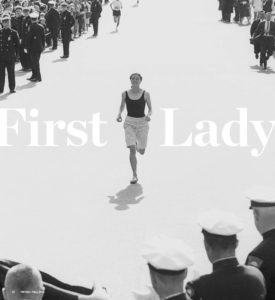 Bobbi Gibb was just days off a plane from her native Boston when she began running long distances throughout San Diego. Though far from the wooded forest trails of her youth in Massachusetts, San Diego County offered ample space for the future philosophy major to think; it was her means of physical meditation,  letting her mind ponder the mysteries of the universe. As she settled into San Diego life, she routinely ran 30 miles in a day, around Balboa Park, Coronado, Imperial Beach—even accidentally wandering into Mexico.

In 1966, this was not exactly typical of a 23-year-old Navy wife, but Gibb was a woman well ahead of her time.

“Back then a woman was put straight into a box—you could be a wife, a mother and a homemaker, but that was it,” says Gibb. “I had no problem with getting married and having kids… but I had no intention of being a homemaker.”

A female runner was a definite anomaly in those days. Lacking true equipment, Gibb ran for miles in nurse’s shoes, a one-piece swimsuit and a pair of old  shorts. One day on a run from her cottage near Balboa Park up through La Jolla, Gibb passed Scripps Institution of Oceanography, running her hardest up the cliffs only to find the summit being carved by huge yellow earth movers. This was the beginning of Revelle College, and this first sight of UC San Diego spoke to her profoundly.

“I need to learn more,” Gibb recalls thinking in her 2011 memoir, Wind in the Fire. “I need to go back to school and to learn everything I can about biology, physics, matter and mind and philosophy… I have been a solitary thinker and now I want to know what other people have thought about these matters. As I look around in amazement at all this activity, I’m filled with the powerful sense that this is where I belong… this is where I’m supposed to go to college.”

Still sweaty from running, she walked into the admissions office—one of the few buildings then constructed—and signed up for classes that fall.

It was not the first time Gibb had witnessed something and felt a calling to become a part of it. Years prior, while on one of her regular runs through the woods outside Boston, Gibb recalls catching sight of a throng of runners treading down the street together, united in the effort she would later learn was the Boston Marathon.

“These are my people!” she thought. “Finally, other running adults. I can do this!” Just as committed as she was to join UC San Diego, she resolved then to run the Boston Marathon someday. It didn’t occur to her, however, that it was only men she’d seen running.

At home in La Jolla, with an academic career on the horizon, Gibb made plans to achieve this personal milestone before embarking on her educational one. She wrote a letter to the Boston Athletic Association requesting an application. Yet when their response arrived back, the message was devastating:

We have received your request for an application for the Boston Marathon and regret that we will not be able to send you an application. Women are not physiologically capable to run 26.2 miles and we would not want to take on the medical liability. Furthermore, the rules of International Sport and the Amateur Athletic Union do not allow women to run more than the sanctioned one and a half miles. Sorry we could not be of more help.

Gibb was outraged. She was infuriated. She was anything but daunted. Though she had always thought of the race as a challenge for herself, it was now something far bigger. She resolved to make a statement. She had to prove them wrong.

So when the week of the marathon arrived, she got on a cross-country bus headed back to Boston.

Abridged from Wind in the Fire by Bobbi Gibb, Revelle ’69

Barren trees, still wrapped in winter gray, brush the April sky with pastel shades of mauve and lavender. Runners in brightly colored clothes mill among the trees, clustering and talking in groups. The reality hits me—this is a real race and real people; they really do not allow women. There are policemen here who can arrest me. I have no idea what I am getting into. My greatest fear is that I will be stopped, prevented from proving that a woman can run twenty-six miles.

I trot slowly around the town getting the lay of the land. Next to the common I find a little hollow, which smells dank and dusty with last year’s leaves. I crouch down, hidden in the bushes. The dead litter rustles under my shoes. My heart is beating fast inside my warm sweatshirt. I feel the restless energy in my legs and thighs. I wait, poised, ready to leap.

The bang of a gun drifts across the light spring air and a cheer goes up from the spectators. The mass of runners springs forward with a roar. I wait until about half the pack has gone and then leap out of the bushes. My legs unfold and my feet hit the pavement running hard. The physicality of other runners surrounds me—the flailing arms and legs, the intense concentration, the heat, the sound of soft, strong foot falls on the road.

I hear the men talking to each other in hushed tones.

I turn and smile.

“Are you going the whole way?” asks the lanky man beside me.

The weight of responsibility presses on me. Failing to finish will end up setting women back. People will say, “This is why we don’t let women run. Women really are not capable of these things,” And the door will be slammed even more tightly.

The men are friendly and supportive. “We won’t let them throw you out,” they agree.

I reach my arms up and pull the sweatshirt over my head. For a second, the crowd is silent.

“It’s a girl!” a woman screams from the crowd.

We speed on through Wellesley, where the women at the college have been listening to my progress on the radio. When they see me, the intensity of their screaming increases.

“A woman is running!”

Some of them are crying. One woman has several children clinging to her ample overcoat. “Ave Maria!” she shouts, tears streaming down her face.

We run over the bridge across Route 128 like a herd of wild animals. People cheer and clap. “Heartbreak Hill,” I hear from another runner. “It’s a killer.” We’re on Route 30—seventeen miles. I feel great, though I’m not used to running on pavement and my shoes are chafing. We start to climb.

The incredible strength and endurance it takes to run a marathon, to live a life with integrity. You are surrounded by other people running, but no one else can do it for you. You have to do it yourself. I watch the patterns and sparkles in the pavement, and I am filled with a sense of their beauty.

The road goes up, as do we. Pace slows as runners strain. I feel the edge of fatigue for the first time, no longer reining in, but pushing to keep going. Finally the hill crests and a view of Boston opens up.

The Prudential Tower is closer than I thought. Boston College slides by. Only five miles more to go.

I can run five miles in my sleep, I think. Such a feeling of elation and success! Yet the marathon is no place for smugness. The steep downhill slope rips apart my legs. The blisters on my feet have burst, the raw flesh is rubbing on my stiff boys’ running shoes, and running in the heat has left me seriously dehydrated.

Our ragged bunch of survivors pass into Boston, while busloads of men who have dropped out wave and cheer at us. Kenmore Square looms above everything else.

“One more mile!” the crowds chant. Yet my pace has dropped off. I am barely moving, tiptoeing along, each step sending a searing jolt to my brain. My blistered feet feel as if they are cut through to bone. The bottoms of my feet are on fire.

This is where I discover the real meaning of fortitude: to go on, to keep going in the face of disappointment, to see your hopes dashed but to keep on anyway, to finish what you set out to do even if it isn’t what you had hoped. This last mile takes me longer than the preceding five.

I turn back onto the brick canyon of Hereford Street, where so many people crowd into the street only a small passage is left.  I turn onto Boylston and suddenly the road opens up. Thousands of people line the streets. The press truck rolls along beside me, flash bulbs, the announcer and police. I pick up my pace and trot across the finish line in a time of three hours and twenty minutes, I’m told, ahead of two-thirds of the pack. Not bad, I think.

Those who kept my pace congratulate me. Some kind soul throws a wool blanket around my shoulders. I’m overcome by a  supreme happiness, having reached the end of a long journey which I hope will change the world for the better, and begin a new journey for our times toward a better world for all. 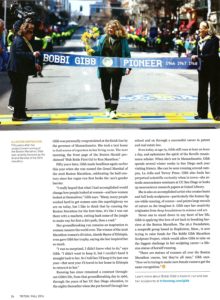 One thought on “First Lady”