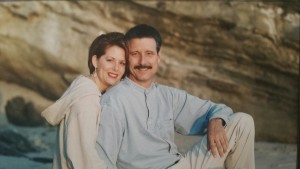 Seven years ago Jamie Tyrone of Ramona, California seriously thought about taking her own life. To look at this 55 year-old attractive, intelligent, savvy woman full of kindness and grace, you can’t help but wonder why. It seems hard to believe because she has a loving husband and family, friends who think she walks on water and a positive outlook on life. But seven years ago the world came crashing down on this retired nurse.

Since childhood Jamie has witnessed four family members develop and die of Alzheimer’s disease, and then in her adult years her father developed it. Once again she watched a loved one fight, but lose his battle with the brain-ravaging disease. At the time she never thought that she too could be afflicted by the devastating, fatal disease. She didn’t get the genetics connection. Then she participated in a research study to find out her risk for another, unrelated disease. She was shocked to learn that she has two copies of the ApoE4 allele gene (one from each side of her family), which puts her at a 91% risk of developing Alzheimer’s disease. She is part of an exclusive, albeit unwanted, club; only two percent of the population inherit two copies of the ApoE4 gene. Developing Alzheimer’s is pretty much a foregone conclusion when you find out something like that.

Jamie’s life came to a halt as anger, despair, fear, and anxiety consumed her. She describes that time as living in a deep, dark hole. Her chances of developing Alzheimer’s is 12 times more likely than the general population; she is also at a very high risk of developing early Alzheimer’s, which usually hits before the age of 60. She had good reason to be depressed. She shut herself off from her husband and everyone else. She began drinking excessively; her anger took a toll on her marriage. Then her husband, Doug Tyrone, an executive at Scripps Health, said “Enough”, telling her that she had to figure out a way to deal with the risk and depression before it destroyed what was left of their marriage.

Jamie knew he was right and that he was giving her a wake-up call, one she couldn’t ignore if she was to save her marriage, and herself. She pulled herself up out of her black hole and pushed herself to get help. She learned that she suffered from post-traumatic stress disorder (PTSD), a condition brought on with finding out her double gene status. She made a decision. Rather than let herself be consumed by both her probability of developing Alzheimer’s and the PTSD that was ruling her life, she went into therapy, leaned on friends and family and turned to science. She joined a program at the Total Health Center in San Diego led by Dr. David Clayton; a program shaped by a study out of UCLA that showed lifestyle changes can reverse memory loss in dementia patients.  At Dr. Clayton’s urging she began a Paleo diet, began taking numerous supplements, and exercising both her body and mind. She also began volunteering as a lab rat, knowing that her unique gene status could help researchers learn more about the disease and find a way to either stop or prevent it. She joined a long-term study at the Banner Alzheimer’s Institute in Phoenix. She spends three days every other year undergoing brain scans, cognitive and memory testing. Jamie also agreed to have her brain donated and autopsied after she passes.

While that seems like a lot of change, Jamie wanted to do more. In 2012 she founded a non-profit group, Beating Alzheimer’s By Embracing Science (BABES), to raise money for research and to educate the public about the insidious disease. Has all this activity helped? Jamie says that making personal changes and founding BABES created a renewed sense of direction and purpose that soothed her wounded soul. Even though she knows that her efforts will not likely save her own life she is content knowing that she is helping others. I’d say that’s about as good an example of The Goodness Principle as I’ve ever heard.

If you met Jamie, who can only be described as giving and loving and compassionate with a smile that lights up the dimmest room, you would never imagine that this woman once stood precariously at the brink of suicide, ready to give up. Maybe it takes standing at the brink to find one’s purpose after learning your future is paved with heartache and uncertainty. For Jamie that brink pushed her to find her purpose, to find her future and at least for the present, a way out of quagmire.