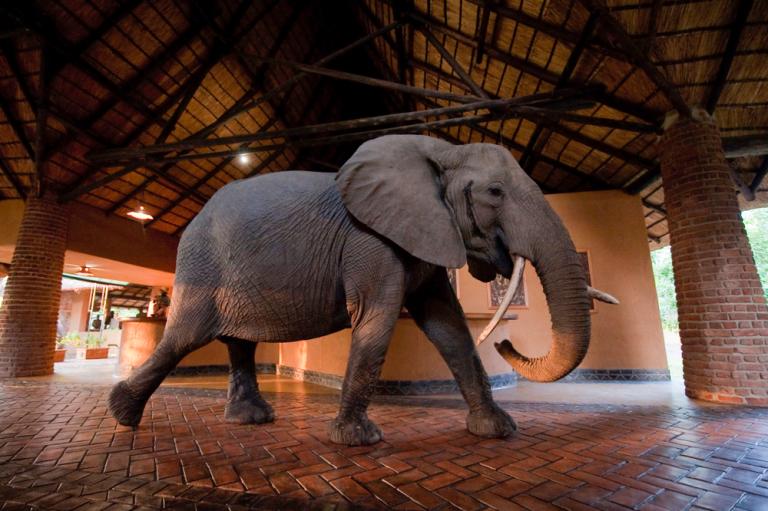 When the Mfuwe Lodge was built in Zambia in 1998, they had not planned to tempt massive elephants to wander inside, yet that is exactly what happened. The lodge was inadvertently built around a mango tree that a local group of elephants habitually feed on. Not only that, the lodge sits right on the ancient path the elephants have always used to reach the tree. When Mfuwe opened for business, the elephants made it unmistakably clear that they had no intention of changing their established route. They walked in, oblivious to the employees, acting like they owned the place, and then sauntered through the lobby and out into the courtyard to feast on “their” mangoes.

Can you imagine working at the reception desk the first time this happened? What an amazing spectacle to witness, if you didn’t faint. Since the first time the elephants strolled through the lobby their visits have become one of the lodge’s main draws, attracting hordes of tourists every year. According to the lodge, the elephants that make this annual stroll through the lobby consist of three generations of one elephant family, including their matriarch “Wonky Tusk” and the young “Lord Wellington,” who was born on the lodge grounds in 2009.

In 2014 wildlife cameraman Nathan Pilcher traveled to Mfuwe to see the elephants for himself. Lucky us, we can watch his short film and observe this wonderful sight by clicking on this link.

You may be wondering why a story like this was selected to be featured in The Goodness Principle. When you watch the film you will probably be as astounded as I was at the implicit trust the elephants have in the humans, people with whom they had no established relationship. They didn’t know if the humans would hurt them and conversely the humans didn’t know if the massive elephants would attempt to destroy the lodge or worse, harm them. From the start there seemed to be an implicit faith that neither group would hurt the other. I think that you will agree as you watch the film that the display of that trust is a fine example of The Goodness Principle at work.