If you live in the San Diego vicinity, no doubt at some point you’ve seen a little Boston Terrier dressed up as a biker in a black leather vest, biker goggles, sporting a “doo rag”, bandana around his neck, and riding a miniature motorcycle that looks like a pint-sized Harley Davidson. He’s always with his “dad”, Mark Shaffer, a man with a heart so big, and so kind, one wonders if he wasn’t born with two. Mark and his dog, Chopper, define the term “earth angel.” They do more good for people in one year than most people do in a lifetime. 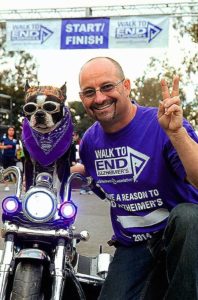 Mark and Chopper’s story began eight years ago, when Mark acquired him as a three-month-old puppy. A year before, Mark had lost his first Boston Terrier, Bandit, to cancer. Losing Bandit, who had been his biker buddy, hit him hard. Once he healed, Chopper came into his life. Though Chopper was a cute little tike, Mark wasn’t sure if he would take to the miniature motorcycle that Bandit used to ride. A month later, a local organization called The Nice Guys, invited Mark and Chopper to their annual Christmas party where they give out gifts and food to people in need. Mark used to attend every year with Bandit. He had no idea how Chopper would react to the bike, if he would even get on it.

“I took Chopper and the little motorcycle, the goggles and his little Harley T-shirt, put him on the motorcycle and he rode that little motorcycle just like he knew what to do,” Mark remembers. “It was his first time and he never tried to hop off. Who knows, maybe Bandit’s spirit was riding with him.”

Mark knew then and there that he and Chopper could continue what he started with Bandit.

Initially, Chopper rode Bandit’s bike, then some fans from Florida came to town and asked to meet Chopper. The husband was an engineer and wanted to create a new bike, just for Chopper. The man returned home, bought a little bike, took it apart and rebuilt it to look like Mark’s Harley, all at his own expense. He customized the paint, added LED lights, a sophisticated remote-control system, and better steering control. It was going to cost $800 to ship the bike to San Diego. Not to be deterred, Mark and the engineer raised the funds online to pay the cost. 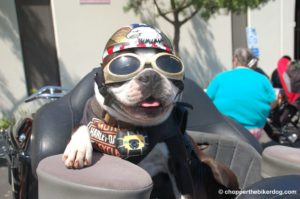 The two pals attend about a dozen fundraising events a year to support their favorite charities. Events like the Walk to End Alzheimer’s, the Breast Cancer Walk, Tip a Cop, the Special Olympics Law Enforcement Torch Run, where cops carry a torch from Chula Vista to Los Angeles, the Law Enforcement Teddy Bear Drive for Rady Children’s Hospital, and the Hornblower Cruise to help raise money and blankets for the Helen Woodward Animal Shelter.  That sounds like a lot, but that’s just a part of what they do. When they’re not attending events, they make about 30 visits annually to patients in local hospitals, nursing homes, memory care centers and hospice, including visits to our local veterans. As a certified therapy dog, Chopper brings smiles to patients’ faces when he rides his mini motorcycle into their rooms, dressed in his leather duds. Once the chuckles die down, he gets onto the patients’ beds, curls up and snuggles with them, imbuing them with therapeutic doggie love.

Chopper has fans everywhere, especially in the law enforcement community. Check out the video of the day Chopper got stopped by a San Diego policeman here. The two buddies have an affinity for law enforcement and the military; if Mark hears about a need, he and Chopper make it a point to visit before anyone asks. One particular law enforcement officer story stands out in Mark’s memory.

“A deputy sheriff and his wife from Oregon were vacationing in Mexico when they stepped out of their hotel and were run over by a car,” Mark says. “When the police arrived, the wife was in such bad shape they covered her with a sheet, signifying she was dead. They soon discovered she was alive, barely. The couple was transported to a trauma unit in San Diego.”

As soon as Mark learned of the tragedy by the Eugene Sheriff’s Department, Mark scheduled his first visit. The husband had already been air-lifted back to Eugene, while the wife stayed hospitalized in San Diego. Chopper and Mark began visiting her as often as possible, Chopper curling up next to her on the bed. When they arrived for their second visit, the woman’s brother met them in the hospital lobby and told Mark that she suffered so much brain damage that she wouldn’t remember them when they entered the room. However, when Chopper rolled in on his motorcycle, the woman pulled herself up off her pillow and said, “Chopper, buddy!” 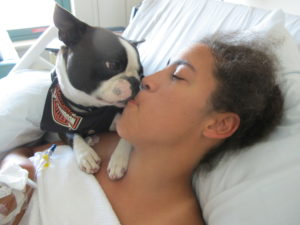 “All her relatives in the room broke out in tears, because it proved that her brain was healing and her cognition was coming back. Chopper gave them hope that she would recover,” he says.

The day Mark learned that the wife was going home, he called San Diego Police Chief Shelley Zimmerman, who gave her blessing to do whatever Mark planned to help support the Deputy’s wife. Mark arranged to have six San Diego police officers and two California Highway Patrol officers, escort her from her hospital room to the waiting ambulance. Once secured inside, the Highway Patrol escorted the ambulance to the airport with their lights going all the way.

“We wanted her and her family to leave San Diego with ‘respect’ and something positive,” Mark says. “She was life flighted home with doctors on board.” 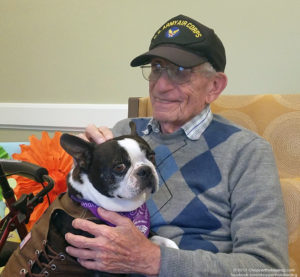 Two years later Mark and Chopper took a trip up the coastline, stopping to visit patients in memory care centers, hospitals, veterans, police officers and nursing homes along the way. The trip ended in Eugene, Oregon where after two years, he and Chopper were reunited over dinner with the now retired deputy sheriff, his wife and their family.

“It was a very emotional reunion,” Mark recalls.

Then he received a call from a local television station telling him that a man phoned the station because he heard that Chopper was in town and the man’s daughter wanted to meet the canine celebrity. The station directed Mark to the school where they found the entire student body waiting for them in front. He learned that about the time the deputy sheriff and his wife were injured, the girl had been given a class assignment to write about a hero, but it couldn’t be an entertainment celebrity. The girl had heard about what Chopper had been doing for the wife of their local Deputy and wrote her school paper about Chopper.

While that was one of the big ones, Mark could fill an encyclopedia with stories about what Chopper’s presence has meant to people, how his very being comforts and soothes like a balm. From hospitalized law enforcement officers injured in the line of duty, to family members in nursing homes grieving the loss of a loved one, to patients in memory care centers whose faces light up when they see the quirky little dog in biker leathers ride in on his customized motorcycle, Chopper makes an impact wherever he goes. 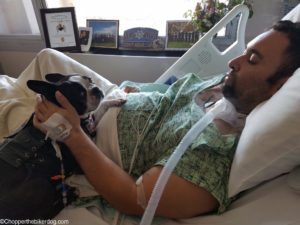 In San Diego, Chopper is more than a local celebrity, he has built a world-wide fandom through social media, (over 117,000 followers on Facebook and growing) and not just because he’s adorable in his biker outfit and sports a biker-dude persona. More importantly, he is known for his unflagging work ethic and the immeasurable hours of volunteering in the community, never asking for anything in return. It’s easy to get caught up in Chopper the legend. After all, he is really, really, cute and as sweet as a dog can be. Sometimes people don’t realize, or they forget that the extraordinary little dog in leather biker duds is one half of a duo. A selfless man and his selfless dog who spend their free time doing good. And if that isn’t the best example of The Goodness Principle, I don’t know what is. I’ll tell you this much, San Diego is proud to call them our own.

Want to learn more about Chopper? Be sure to visit his Facebook page here,  and his website here.